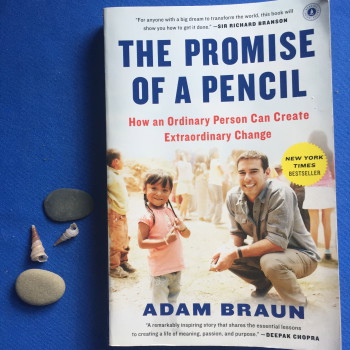 The Promise of a Pencil

Ever thought of ditching the corporate world and devoting your life and career to building an NGO that promotes education throughout the world? You’re not the only one. As our children look to more altruistic careers there’s a good chance that many of them will search for a path just like this and this inspiring book might just show them the way.

Adam Braun began working summers at hedge funds when he was just sixteen years old with a dream of becoming a successful Wall Street highflier. While backpacking however, he met a young boy begging on the streets of India, who after being asked what he wanted most in the world, simply answered, “A pencil.” This small request led to an amazing series of events that took Braun backpacking through dozens of countries before eventually leaving his prestigious job to found Pencils of Promise, the organisation he started with just $25 that has since built more than 200 schools around the world.

The book breaks down Braun’s personal journey, with each title named after a lesson he learnt, from Tourists See, Travellers Seek, to Stay Guided by your Values, Not your Necessities.  The language is simple and Braun has been criticized for being a bit self-congratulatory.  He’s also criticized for the subtitle of the book: How an Ordinary Person can Create Extraordinary Change. Braun comes from a wealthy and privileged Connecticut family.  His brother is Justin Bieber’s manager. He can network old school contacts and work the room.  None of this should take away however, from the fact that he decided to dedicate his life to this cause.  What he has achieved is remarkable, and his single-minded focus on achieving his goals and the ingenious ways he found to get there are solid lessons for our kids.

Read and pass on to your kids. Tell them it’s written by Justin Bieber’s friend, Adam. (Bieber donates a percentage of many of his concerts to POP). The message is a good one: make your own life a story worth telling.