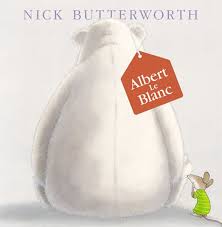 When Albert le Blanc arrives in Mr Jolly’s toy shop, he immediately catches everyone’s attention.  Not because he’s so big, but because he doesn’t have a smile.  In fact he’s the saddest looking bear the other toys have ever seen and they decide to make it their mission to make him smile.

They put on a show to cheer him up even though he keeps trying to tell them something. Eventually he manages to shout out “I’m not unhappy!  This is the way I look.” Not before Sally the Hippo, who has put on some red lipstick and performed a little ballet dance, falls on top of him, leaving him with a huge lipstick grin on his face. Everyone bursts out laughing, including Albert.

A lovely, original story about appearances, the power of a smile and the warmth of friends. Children seem to love saying Albert’s name – especially if you can get them to say it with a French accent.  Nick Butterworth is the award-winning author and illustrator of many books, including Percy the Park Keeper and The Whisperer among others. 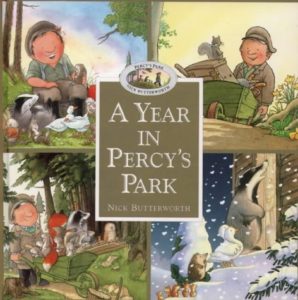 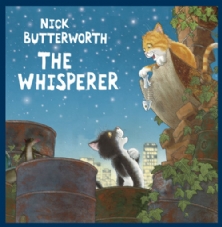