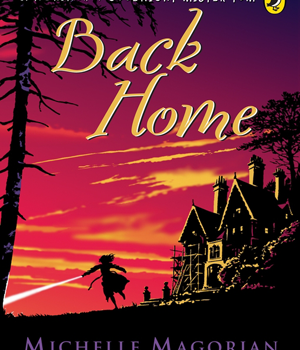 When 12-year-old Rusty returns home to England after being evacuated to America during the Second World War, she has a dismal welcome.  Five years is a long time and she no longer remembers her home country – everything really has been bigger and better in America.  Her mother’s shyness and exhaustion from working as a W.V.S (Women’s Voluntary Service) driver and mechanic hinder them from connecting warmly and her four-year-old brother ,whom she has never met, is jealous and openly dislikes her.  It doesn’t end there – everywhere she goes she is laughed at for her American accent and her descriptions of the yummy food and fun things she did ‘back home’ only irritate the English who have suffered austerity and don’t like over-confident girls.

She can’t understand why she can’t challenge an adult’s authority, after all, her ‘Uncle Bruno’ – the father of the family who looked after her in Connecticut – encouraged his large family to have their say.  She is now more a product of the American way of life than the British.  Shouting ‘Zowee’ when she’s excited and saying ‘Ok, Uh-huh, You know it, yeah and swell’ are a few of the ways Rustry stands out – that and her flaming red hair and her cool American clothes which throw the other children into fits of jealousy.

The story follows her vain attempts to make friends at her new boarding school, to accept rules she doesn’t understand and to adjust to a grandmother who thinks ‘children should be seen and not heard’.  When her father returns from the war there is even more hardship when he orders her to stay at boarding school for the whole term.  To catch up the subjects she has missed she is not allowed to go to her beloved art, drama and music lessons. Increasingly isolated and dropping weight, Rusty withdraws into herself until she hardly notices the cruel jabs and put downs the other girls and teachers give her.  Her only solace is a cabin in the woods she discovers and another American evacuee called Lance who is also miserable at his boys’ boarding school down the road.  Things come to a head when both these are threatened to be taken away from her and she decides to run away.

This is one of those books you can’t put down, with a heroine you can’t help but love.  You feel indignant at the cruelty of teachers, children, her father and grandmother – and hopeful at her relationship with her mother, who is also battling for her freedom after her independence during the war years.  The book tackles topics such as feminism, the Second World War, depression, the Hiroshima bomb, adolescence, bullying and divorce.  There are brief references to menstural periods, bra’s and going out with boys.

The story feels authentic – the only jarring note was the fact that the ‘bad’ characters seemed a bit one dimensional – her school teachers, father and grandmother were so horrid you wondered why they were that way. You can only assume that Rusty’s father was stuck in his traditional upbringing, despite his love for her. For a heroine who is so open and fun loving, it’s also hard to understand why almost none of the characters in the book like her.  I had no idea the English had such a huge disapproval of America after WW2 – perhaps because of their late entry to the Allied side.  On the whole this is an excellent and engaging read from the author of the beloved Goodnight Mr Tom – another classic Word War Two book. 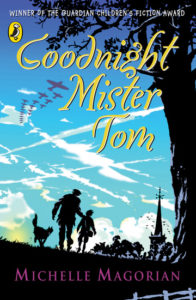