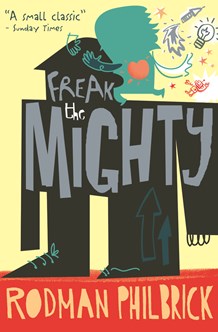 Freak the Mighty vs The Mighty

Freak the Mighty, by Rodman Philbrick, is a popular middle grade novel about two unusual boys and their friendship. Max is a slow learner stuck in the body of an oversized teenager and Kevin (Freak) is a small boy with a near genius brain, stuck in leg braces and crutches. He suffers from a condition called Morquio Syndrome. Although they are very different there are parallels in their lives – both have been ostracised due to their backgrounds and physical appearance. As outsiders they are both victims of bullying. Both grow up fatherless. Max’s father is in prison for murdering his mother and Freak’s father left when he was little. Max lives with his grandparents and Freak lives with his mom.  When Max gets the idea to let Freak sit on his shoulders they make up ‘Freak the Mighty’ and they can do anything together.  “Freak is holding tight to my shoulders and when they ask him for his name, he says, ‘We’re Freak the Mighty, that’s who we are. We’re nine feet tall, in case you haven’t noticed.’ That’s how it started, really, how we got to be Freak the Mighty, slaying dragons and fools and walking high above the world.”

There are lots of twists and turns involving bullies, a murdering father, a daring escape and a very sad ending. Max’s ultimate lesson though, is uplifting: he has become transformed by his friendship with Freak.

Our guest reviewer, Aimee, age 12, compared the book to the movie version called The Mighty for a class exercise. Lets see if you agree with her:

Freak the Mighty vs The Mighty 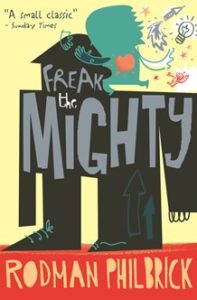 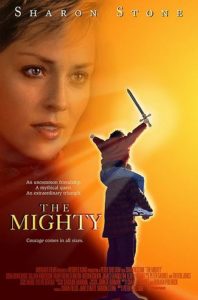 People usually automatically say the book is better than the movie but in the case of The Mighty the film adds a lot of dramatic elements that made it exciting, powerful and entertaining.  The film brings the story alive through the music, the powerful cinematography and the actors, who were all outstanding.

Ways the book and movie are similar and different:

Max is the narrator in both the movie and the book. The film is extra powerful though because there are parts where we see what happens instead of Max just telling us and that is sometimes better as we can imagine how it made the characters feel.

In the film there are two scenes at the basketball courts which show the bullies picking on Max and Kevin. When we see Max getting bullied in the film we feel emotional and angry – so we feel Max’s emotions. When he just talks about the bullies in the book it doesn’t sound as bad.

King Arthur and the Knights are a big part of the film from the very beginning and it makes a big impact when you see the knights riding over the bridge and hear the music playing. This is very dramatic. In the book you just read that Freak loved King Arthur because he dressed his knights in armour. Freak says “The knights were like the first human version of robots. They wore this metal armour to protect them and make the invincible.” In the film the knights appear whenever they do a good deed, like a quest and this is very effective and full of life lessons.

A long shot is used of when Kevin is on Max’s shoulders and they are walking across the bridge and they imagine seeing knights with horses. From this angle Max looks like the shape of a horse and Kevin looks like he is the knight. This is very effective.

The film uses a lot of techniques to make us feel part of the story and the cinematography really helps with this. The establishing shots help us get an idea where the film is set and we can see it is a big, cold city with bridges, highways, homeless people and industrial areas. In the book we start right away hearing about how Max and Kevin met which is interesting but we have no idea where they live.

There is a scene in the film where Max lies under his bed and imagines looking up into the sky and seeing clouds. He says “There’s a place I go in my head sometimes. It’s cool and dim in there and you float like a cloud. No, you are a cloud. You don’t have to think about anything. You’re nothing, you’re nobody.” In the book he says the same words but it doesn’t feel like such an important scene and it feels sad. In the film you feel like this is good for Max because he can find a place to escape and be soft and calm.

The scene with Loretta Lee, Killer Kane and Max tied up is different in the book and film. In the book Max is tied up and Loretta Lee tries to help him when Killer Kane is out with Iggy. Kane catches her and then is strangling her when Max suddenly remembers everything that happened. In the film this is much more dramatic. You can see Freak walking towards where Max is tied up and you worry something will happen. Then it cuts to Max who suddenly has flashbacks from when his dad killed his mother. You get goosebumps in this scene and its so scary!

Finally the ending (SPOILER ALERT –  DO NOT READ IF YOU HAVE NOT FINISHED THE BOOK!)

When Freak dies it’s very sad in both the book and the novel but in the book he sits in hospital with Freak and in the film there is a very emotional scene when he hears that Freak has died in the night at his house. He runs after the ambulance which is really sad and heartbreaking.

The story is powerful and special in the book and the film but you will walk away from watching the film and feel like you have been on a journey with unforgettable characters.  I think the film is therefore more powerful than the book.