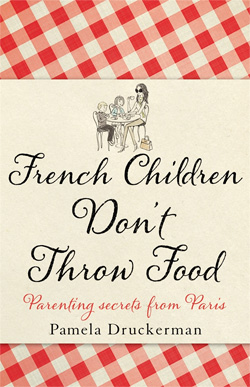 I have to confess I aspire to being a laid back French style mother.  I have the inheritance for it – my family is French.  But being born and raised in South Africa my parenting inspiration leans more towards the Anglo-Saxon model of vague hovering and over analysing things.

Druckerman is a Canadian writer living with her English husband in Paris.  While holidaying in a French seaside town she notices that while they are battling to keep their 18-month-old daughter in a chair and feed her, the French families sitting nearby are having a perfectly lovely meal with children obediently eating whatever is put in front of them and the adults managing to have a conversation with each other.  At home she notices that most of her French friends don’t battle with babies not sleeping at night, toddlers that throw tantrums, children who back chat or make their parents jump with every little niggle.

French parents seem to have and expect a life.  Quelle horreur!  The book is Druckerman’s exploration of what the French secret is. It’s filled with anecdotes and research and her droll humour and self-deprecating observations of how she and other American and English parents, over-parent makes an insightful and entertaining read.  She covers everything from birth to daycare, food and manners. I love how French parents expect their children to disappear at bedtime. “French parents are strict about enforcing bedtime. They treat ‘adult time’ not as an occasional, hard-won privilege but as a basic human need.” Amen to that.

While I don’t think the French do everything better – the book does make you re-assess your parenting style and if nothing else it will make you re-think the snack – that staple of every (privileged) South African child.  The French believe in a ‘gouter’ – a light meal around 4pm, like tea time. Other than that they don’t do snacks.

“Can I have a snack?’ my children ask (nag), regularly filling my shopping list with requests for more ‘snack food.’  Woolies was made for people like me. If I could go back in time I would say ‘Non! Wait until dinner and eat a full meal.’ With a smile of course, because as Druckerman explains, French parents are loving and believe they are teaching their children the best habits.  An interesting read that will either have you nodding in agreement or chucking the book and going out for coffee.  Life is also too short to over analyze why you tend to over analyze your parenting skills!