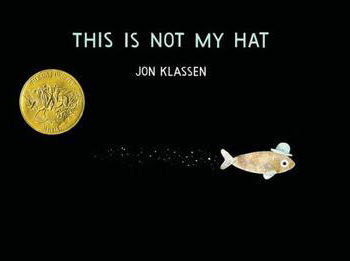 This is Not My Hat

You simply must buy this book.  It is that good. This Is Not My Hat has just earned the double honour of winning both the Kate Greenaway medal and the Caldecott Award. A delightfully simple moral tale with a twist of humour about a fish who steals a hat and thinks he’ll probably get away with it. Probably.

The power of the tale is in the simple text and expressive illustrations.  When the little fish says “And even if he does wake up, he probably won’t notice that it’s gone.”  There’s a silent pause as little readers notice the big fish’s eyes looking up at his head.  ‘I don’t think so!’

The words the little fish uses to express his thoughts, perfectly capture the reasoning of a small child.

‘I know it’s wrong to steal a hat.

I know it does not belong to me.

But I am going to keep it.

It was too small for him anyway.

It fits me just right.”

The emotions conveyed by the silent big fish’s expressions don’t bode well for little fish – building a subtle tension until the final page. You’ll laugh and gasp out loud!  You might know Jon Klassen ‘s previous bestselling book I Want My Hat Back (clearly a theme!) which was shortlisted for the Kate Greenaway award and he also illustrated the animated feature film Coraline.  This is a special book that young readers will ask for again and again. 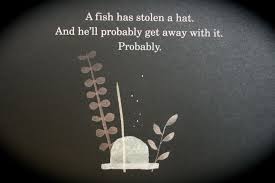