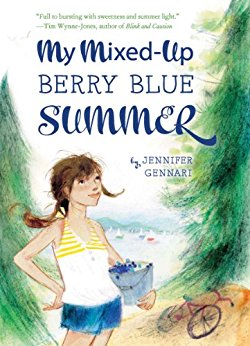 This is the mixed-up summer that twelve-year-old June Farrell learns about making the best pies and sticking by her family – even if it means facing bullying and shame. My Mixed-Up Berry Blue Summer is set in the time of Vermont’s civil union law and June has to deal with the homophobic reactions of the community to her mother’s engagement to another woman.  She also has to learn to share her mother with someone else. And try her hardest to win the Champlain Valley Fair Pie competition.

A real story of mixed marriage seen through the eyes of an average twelve year old – this is a great read to share with all tweens who will be able to empathise with June and her typical tween angst over relationships and being the best. It’s hard to think of your parents being sexual beings, whether male or female or whether they are same sex couples. Imagine sharing that with a whole town and having people debate your mother’s choices?

This book is a good read as well as the perfect springboard to deeper discussions about opinions and beliefs.  Best for age 12+