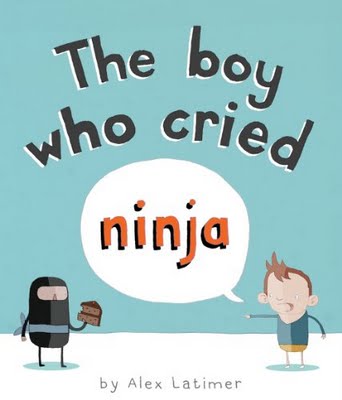 The Boy Who Cried Ninja

It’s hard when no one believes you. Tim is always getting into trouble – except he tells his parents it wasn’t him who did all those naughty things… it was the ninja, or the astronaut, or the giant squid, or the pirate. Of course they don’t believe him and tell him to go water the vegetable patch and think about how bad he’s been.  “If he told the truth, he was in trouble and if he lied he was also in trouble. What could he do?’

He decides to invite all the fantastical creatures who have been causing him so much trouble to a party and when they really do show up his parents finally believe him.  A great little tale that totally plays into children’s wish that parents would just listen to them and believe their stories.  My kids all know the classic ‘Boy who cried wolf’ fable – this is a nice modern spin with a twist to the traditional tale. Latimer, a South African author and artist living in Cape Town, also wrote Lion vs Rabbit and Penguin’s Hidden Talent. Keep an eye out for his range of wallpaper and cards being released soon.