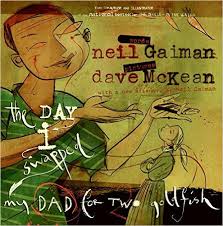 The Day I Swapped my Dad for Two Goldfish

By Neil Gaiman and Illustrated by Dave McKean (Bloomsbury)

This is the off-beat tale of a boy who is left with his younger sister in his dad’s care while his mom goes out.  All dad wants to do is read the paper. All the kids want to do is play.  We never see the dad’s face – it’s always buried in the paper – a little dig on being there but not being present.

When a friend comes over and offers him two goldfish to trade –  the only thing he will take is the dad.  The boy thinks this a pretty fair swap and out goes dad.  It’s obviously very tongue-in-cheek and very funny. His little sister says “You’ll get into big trouble when Mummy gets home…” and of course he does.  Mum orders him to get dad back immediately and there follows a long adventure of finding out what else dad has been traded for along the way (seems no-one else wants a dad who just reads the paper all the time either…).

True to Neil Gaiman style this is quirky, a bit dark and very funny. What I loved is the true to life depiction of a brother-sister relationship and the wittiness of the tale.  My son’s favourite part is when the little sister puts on a  gorilla mask and the brother asks her twice “When are you going to put it on?”  My son must have read this twenty times and went to read it to his big sister.  Gaiman gets the nuances and realities of relationships and manages to get inside the wacky mind of a child who imagines the craziest of things.  In the end the boy declares his dad is ‘a very good daddy’ and better than having rabbits or any of the other things he has been swapped for along the way. His sister however…

Each page is a mixed media masterpiece by artist Dave McKean who has collaborated on many of Gaiman’s books and hundreds of award-winning art of his own, from album covers to movies and books. If you’re not familiar with Gaiman’s work this is a good introduction to his unusual style.  He has written a library of books and comics such as The Sandman, Coraline and Fortunately the Milk – for a full list check here. 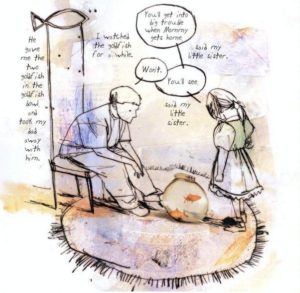 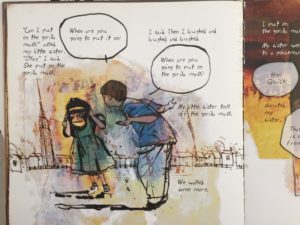 Parent note: Gaiman is not PC.  The boy talks about his sister telling the school he is adopted – as an insult.  The boy retaliates by threatening to tell everyone she is secretly fat.  My children thought this was hilarious but if either of these are issues in your home its good to know about it beforehand.  The truth is children say this and much worse on the playground everyday.  This is a good opportunity for discussion.