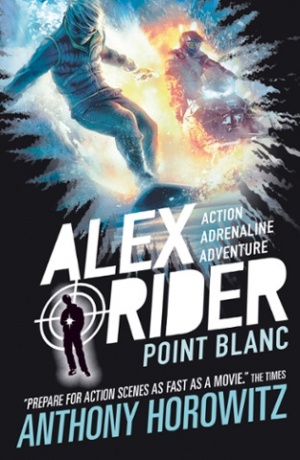 “Most school boys dream of being spies. With Alex, we have a spy who dreams of being a schoolboy,” says Alan Blunt, M16.

The British secret intelligence agency M16 suspect something’s going on at the Point Blanc Academy, an elite prep school for rebels, so they send their best go-to-man, Alex Rider. This is the teenage spy’s second mission and once he discovers what’s really going on in Point Blanc after two of the fathers are murdered, he has to do everything in his power to stop them, even if it means risking his life. The story is exciting, thrilling and suspense ridden and an all round great read. I highly recommend it.

Parent’s Note:
The Alex Ryder books are a supremely successful spy series – children age 10 + love the mix of action and adventure, and the devil-may-care charm of a very worldly 15 year-old Alex.  Detractors feel he is a bad role model as he is disrespectful of authority, has the negative attitude to school that most kids really do –  and is arrogant.  He also label drops constantly – Nike anyone? However you can’t ignore the fact that he speaks to the fantasy that boys in this age group have – independence, cool cars, hot clothes, good looks and the ability to face danger head on.  Think a young James Bond and you’ve got Alex Ryder. Give it a try.