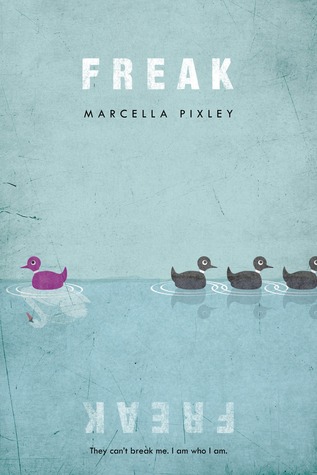 Freak. Bully.  When aspiring poet and self confessed geek girl Miriam Fisher enters Grade 7 her life becomes unbearable.  Tormented by a group of popular girls, ridiculed for having a small bust and for saying what she thinks and being a little ‘weird’, Miriam finds herself pushed to breaking point.  Her unrequited love for Artie, a high school boy and love interest of her suddenly popular older sister, adds to her torment.  She writes poetry for Artie and fantasizes about being together with him. Her sister tells her straight: ‘People don’t respect you for your differences.  They hate you.’ Finally when Jenny Clarke, the head of a group of popular girls, pushes her too far, Miriam takes matters into her own hands and does something that shocks everyone.  By no longer caring what anyone thinks of her Miriam discovers her strength and in doing so ends up helping Jenny and seeing the crack in her perfect girl armour.

While reading I kept thinking this can’t really happen. To think that people – young kids – can be so cruel is disturbing and disheartening.  I don’t think my children go to schools where this level of bullying would happen, but I can believe that it does happen. This was at times an unenjoyable read because the hero of the book is a difficult character.  It was like she drew a target on her forehead and did things that attracted negative attention.  It’s hard to accept that she wouldn’t tell her parents what was happening and her imagined love affair with Artie is like a case of puppy dog love gone wrong.  Maybe I’ve forgotten what if feels like to have an all consuming crush on someone and blush every time their name is mentioned. Actually no, I do remember and yes, I probably did embarrass myself but no-one was mean about it the way these kids are.  What’s wrong with them?  What’s wrong with our society?

Bullying is such a topical issue and it’s important that it’s discussed and understood from all angles.  It was interesting to see the flip side of Jenny’s life and to show that the bully can be the freak and the freak can be the rescuer.  An important read but not a comfortable one.