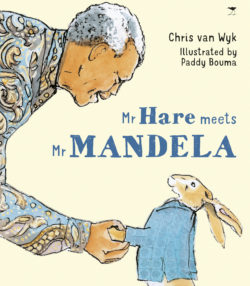 By Chris Van Wyk and illustrated by Paddy Bouma (Jacana)

When Mr Hare discovers a R200 note in his doorway and sees Mr Mandela’s face on it, he decides it must belong to him.  He calls all the animals to announce that he will brave the city of Johannesburg to find him.  The animals all warn him that he can’t read so he needs to be careful he doesn’t get lost in the ‘city of readers’.  Mr Hare thinks he is the cleverest animal in the land so he says arrogantly “What could happen to me?”

Mr Lion warns him: “Those who cannot read repeat their mistakes over and over again.  And so will you.”

“Hah!” sniggers Mr Hare and marches off without listening.  He tells himself: “I am cleverer by far than anyone in the City of Readers.”

What follows is a funny tale of confusion about just how much money he has and how it keeps disappearing in the big city – a very true tale! A clever moral fable about making mistakes and the price of arrogance (and not reading). It also provides a little math lesson as the R200 whittles down to R10.

Chris van Wyk is the celebrated late author of books such as Eggs to Lay, Chickens to Hatch: A Memoir and the children’s abridged Nelson Mandela’s autobiography, Long Walk to Freedom. He also authored numerous books for children throughout his life and was a strong advocate of reading for young and old.

Mr Hare Meets Mr Mandela is one of the last stories van Wyk wrote before he died and it originally appeared in the Sunday Times Storytime: 10 South African Stories for Children.