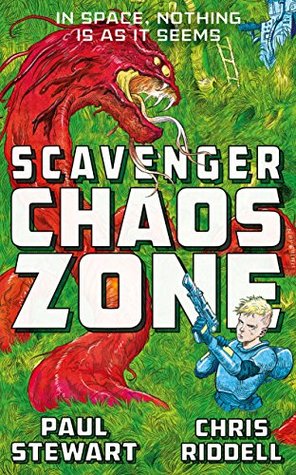 By Paul Stewart and illustrated by Chriss Riddell

Scavenger is a sci-fi series about York, a 14 year old zoid (robot) hunter and killer in a world gone mad. Picture robots and humans facing each other in deadly battle. In the first book, Scavenger: Chaos Zone, robots aboard a giant spaceship that sets out to find a new earth become zoids and rebel against their human companions. Soon, almost all humans are dead and the only survivors are hunted down and killed. Only the Scavengers, like York, are fighting back. Humans need zoid parts to fix their own broken technology but survival looks increasingly unlikely as the zoids evolve and become ever more dangerous. York needs all his courage to save himself and his people.

Interesting fact about Chris Riddell and author Paul Stewart – they are both fathers and met picking up their kids from school in Brighton.