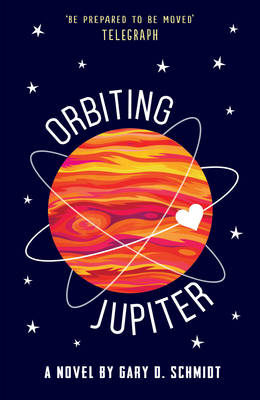 Orbiting Jupiter is a heartwarming story about a teenage boy called Joseph, who has a baby. Joseph moves in with a foster family but all he can think about is meeting his daughter. The story is told from the viewpoint of Jack, his foster brother. As Joseph tells him all about Madeleine, the girl he loves, we learn more about how Joseph came to be such a young father.

Joseph also explains why he was a troublemaker at all his old schools. There is a story that goes around that he tried to kill his teacher and this could make you judge him but then you learn the circumstances.

This book is about a journey with a 14 year old boy, a foster family and new characters along the way. One of the main themes is brotherhood and love. I found this story page turning and exciting. It was hard to read as it was sad but beautiful. It is for an older audience (13 and above) because it has difficult and mature themes. Orbiting Jupiter is one for your bookshelves.

Parent note: The book deals with teenage pregnancy and abusive fathers and is better for more mature young readers.  That said, it is beautifully written and it deals sensitively with these issues, impressing that you should never judge someone until you know their story. Longlisted for the Carnegie Medal.